Before we get into the basics of speakers and an AV receiver, we should probably take a few minutes to discuss how all of your components will talk to one another. While your projector will have a smaller number of inputs and outputs than today’s receivers, it’s still important to understand what each one is, as well as how the evolution of video will affect you. The 5 types of video connections you’ll typically see on your devices are composite, s-video, component, DVI, and HDMI. We’ll discuss each one below.

Composite – Composite connections are by far the ones that have been around the longest, and you’ll be hard pressed to find something that DOESN’T have these inputs. Like that person at the office who’s been there forever and performs sub-par work, composite will always be here because frankly “we don’t know what to do with (insert “him or her here based on your personal experience”).

Whether it’s that new receiver, that old VCR, or even the flip down DVD system in your new car, composite is everywhere. Comprised of three cables, composite cables will carry both audio and video. Audio is carried in a separate left and right channel (identified by a red and white cables), and video is moved over a yellow cable.

S-Video – But then the masses spoke. “WE WILL NOT STAND FOR THIS! WE DEMAND A BETTER IMAGE!”. And with that, S-Video was born. While not much of an improvement by today’s standards, S-Video (the S stands for “Super”) went one step further than composite by separating the video into two channels – one for color and one for brightness. Audio would still be carried by the red and white composite cables discussed above. If you’re stuck between these two options, and these two options only, go with S-Video. 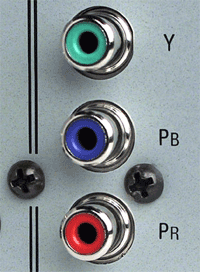 Component – Sticking with the office analogy, component video is the old guy at work who’s been there forever, loves his job, and continues to do great work after all of these years. Sure, there are some newer kids in his department with some wild and crazy ideas, but Mr. Component has a work ethic that is tried and true – you can count on him. Component video is the last of the analog world, with DVI and HDMI moving into the digital realm.  Because of it’s high degree of reliability, component video can still be found on the back of almost every television sold today.

As with composite and S-Video, component also passes the responsibility of moving sound to other cables. What it does offer over S-Video is no three separate channels, based on color, for video. Each cable (there are 3 – red, blue, and green) moves the respective color. What this means for you is a much clearer image and higher resolution (think HD!). 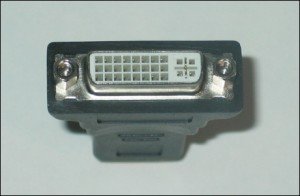 DVI – You may see variations of this name , such as DVI-I and DVI-D. Don’t worry about it. For all intensive purposes, DVI is DVI.  The first truly digital connection , DVI was born in the computer world and first made an appearance on graphics cards and computer monitors.

Seeking more from life than just continuing the same day to day routine in the family business, DVI sought to expand it’s horizons. It did a Priceline search, found cheap airfare to Europe, met a sexy European AV receiver…..and history was made. Their time together was fun, but alas, the receiver’s father demanded more from the person who would take care of his daughter. DVI, as digital as he was, simply could not compete with the local jock – HDMI. 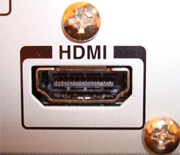 HDMI – He was fast. He was athletic. Sure he had problems, but so what? People liked him and he could do no wrong. What makes HDMI so special you ask? How about the fact that he could carry video AND audio in ONE cable?

What? Say that again, you say?

Ok. How about the fact that he could carry video and audio in one cable. That’s right. HDMI appeared to be the answer to all of our problems. Not only did it offer true 1080p and the ability to carry encoded surround sound to give that true cinema experience, but people could now plug in their TV without having to take a local course at the community college on how to plug in a television or dvd player. One cable to rule them all.

But HDMI did not come without problems. Unlike most analog cables, HDMI signals will degrade over long runs, so if you’re trying to connect that projector to a receiver 2 floors away, HDMI may require a little thought. Also, earlier versions of HDMI may experience some handshaking issues where one piece of equipment will perform an action before waiting for the last one to say “I’m done”. It’s kind of like being cut off by someone before you finish speaking.

HDMI has also gone through several revisions from 1.1 to 1.4, without anyone being there to set some rules and guideline. Like an unruly teenager, HDMI does what it wants, and could evolve to version 1.5 without any notice. Things do appear to have settled down some with version 1.4, which is 3D compliant, so you should be safe for awhile.

And that’s it in a nutshell. HDMI is your best choice, and composite is your last choice. Work in this order and you’ll always have the best video signal you can get. Next, we’ll touch the basics of audio, surround sound, and what all of those fancy acronyms mean like DD and DTS that you see in every movie you watch.