Taking The Mystery Out Of The Aspect Ratio 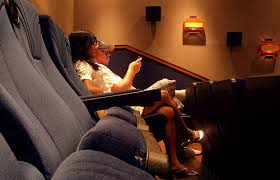 Before we take the leap into projectors, there’s one final  item you need to decide on for your screen – aspect ratio.

Ever notice that those sets on the wall of televisions at your local best buy don’t look as square as the ones people were buying in the 80’s or 90’s? That’s because the aspect ratio has changed for the majority of programming now available.

Where do we start? Well, to understand aspect ratio, we’ll first have to hop in my trusty Delorean, fire up somewhere in the neighborhood of 1.21 jiggawatts, and go back in time! Initially, televisions were made to suit the broadcasts that were going over the airways. Programming was typically broadcast in a 4:3 ratio, which simply means that for every 4 units wide (whether it be inches, centimeters, etc) the image had to be 3 inches tall. This aspect ratio is also commonly referred to as 1.33, which is what you get when you divide 4 by 3.

If you’re one of the unfortunate souls to still own one of these archaic television sets, you’ve probably noticed that when you pop in a DVD of one of today’s movies, your image is even SMALLER. Not only that, but there are now black bars at the top and bottom of the screen.

That’s because you’re trying to watch something that is in a DIFFERENT aspect ratio, most likely 16:9 (also know as 1.78). This is the most common aspect ratio for what we know as high definition television, but it’s been common for awhile (as well as some additional aspect ratios that we’ll discuss soon) in commercial theaters.  1.78 ratios and above are what give you that true cinema feel where you’re taking in everything from left to right across the entire projection stage.

In today’s home theater world, 16×9 screens are by far the most common, as this aspect ratio accounts for a huge majority of movies on DVD today. But there’s a screen ratio that will add even MORE realism and immersion to the cinema experience – 22:9, also known as 2.35:1 or simply “scope”.  Almost every action movie out today is formatted for this ratio or even a slightly larger one.  Below is a graphical representation of several different aspect ratios:

Which Aspect Ratio Is Best For Me?

In my opinion, if you’re going for a full cinema effect in your home, a scope screen is definitely the way to go. If you’re worried about playing other formats on such a wide screen, don’t.  Just like how you’ll see black bars on the top and bottom of a 4:3 set while playing a widescreen movie, you’ll simply have black bars on the left and right of a scope screen when playing 4:3 (commonly called SD content) or widescreen material.

The easiest way to make your decision is to first determine WHAT you’ll be viewing on your new screen. Have a thing for old films and ONLY old films? 4:3 might be best for you.  Look at your DVD collection. On the back of each box you’ll find the aspect ratio listed. Are most of yours 1.78 or 1.85? Maybe one of those screens is best for you.

These formats are also the standard for video game consoles such as Xbox, Playstation , and Wii.  But if you’ve got a thing for explosions, action, gunfire, and flat out in your face action, you’ll probably find that you already have a huge scope collection. Darth Vader may have said it best – “the choice is yours”.

Have a home theater build question that is baffling you? Leave it in the comment section below or check out our Facebook page.