Five Reasons A Home Theater Is Right For You 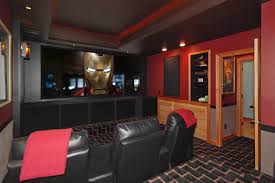 Do you love going out to commercial theaters to catch movies on the big screen, but get annoyed by people constantly talking to each other, putting their feet on your seat, or texting on their always-on cell phones? This seems to be a common phenomenon within the walls of the movie theater today whenever more than three people are in the same room.

In today’s world, where people appear to be more unaware of their surroundings than ever before, you may find yourself less relaxed coming OUT of the theater than you did going into it. Why not eliminate that all together and treat yourself to the same experience….AT HOME!

It never fails. Everyone I talk to loves the idea of having a movie room at home, but they’re either (a)afraid of the costs or (b)so overwhelmed by what they see on TV that they have no idea where to begin.  We’re going to tackle the first one in today’s post, and the second one in tomorrow’s post. But don’t worry, before you know it, you’ll be enjoying the cinema experience from the comfort of your favorite couch.

Here are five advantages of owning a home theater:

So what’s holding you back? Ah, you’re one of those “it’s WAY too expensive people”. Well listen to this. Yes, home theaters can be expensive. However, like anything else (other than collecting Ferraris.. yes, you will never find these in bulk at Costco), it’s only expensive if you want it to be.

One thing that drives me crazy when I ask someone about setting up a projector and big screen in their room is how much money they have to spend to do so. Often, these are the exact same people who 2 months later will go out and spend $2,000 or more on the latest and greatest 50 inch LED 3d TV (go read my comment again above on size.. I’ll wait).  The most simple version of a movie on the big screen consists of a couple of key items – a projector, a screen, a receiver, and speakers.

Most homeowners today already own a receiver and speakers. It might be hooked up to a television or simply set up in an area to listen to music. IT WILL STILL WORK!  You can gain entry into the projector market today for $2500 or less new, and easily half that price used.  We’ll talk more about the options in later posts, but it is possible.

Be sure to check back for tomorrow’s post, where I tell you how to get started on your home theater dream.